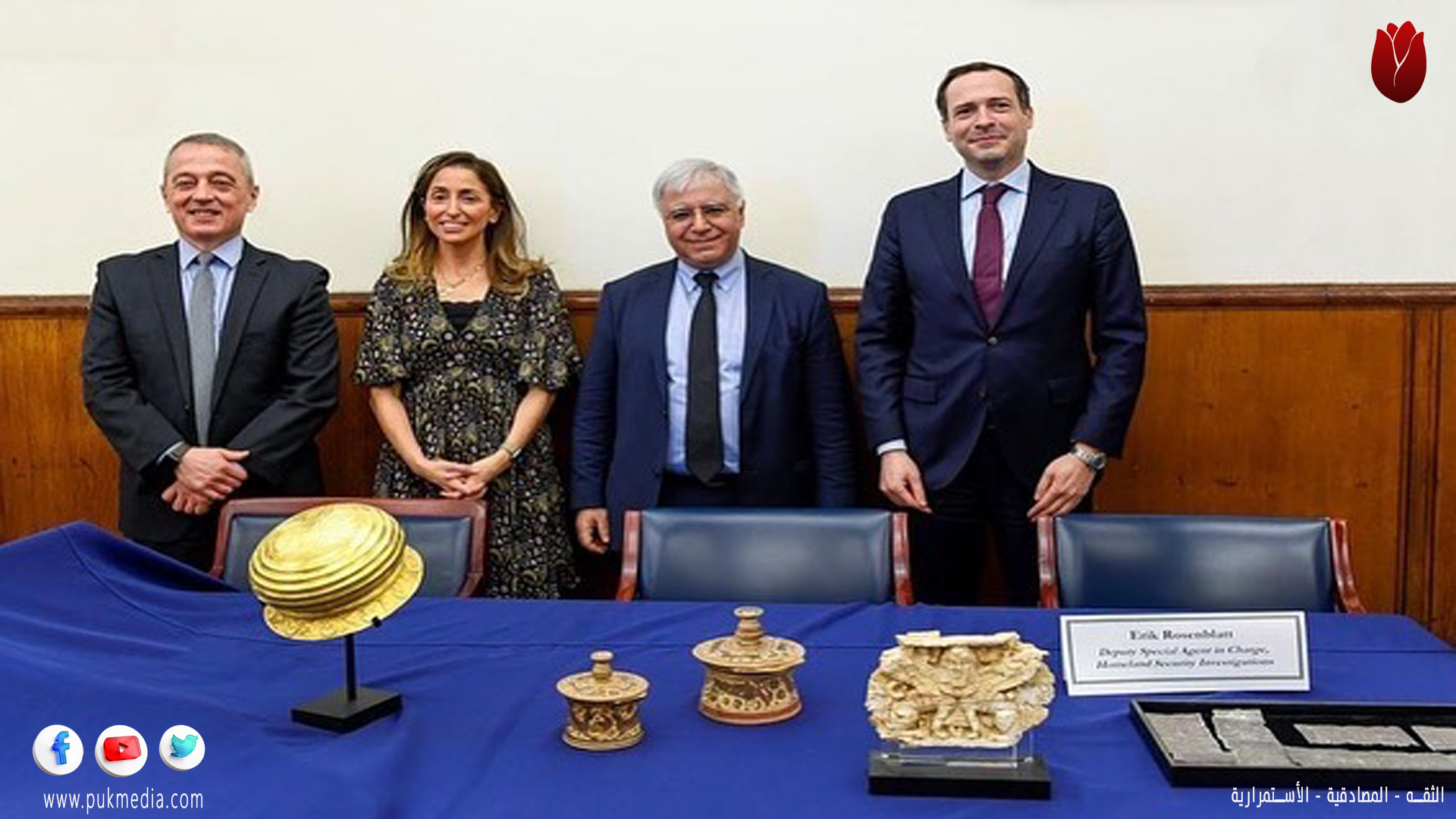 Iraq's Ministry of Foreign Affairs announced on Saturday that they have received five more artifacts from Washington.

Foreign Ministry spokesman Ahmed al-Sahaf said in a statement that "Iraq's ambassador to the U.S., Farid Yassin, received five artifacts that had been stolen during the past thirty years as part of efforts to return the smuggled artifacts."

For his part, the Iraqi Ambassador said upon receiving the artifacts, "I am grateful to the Manhattan District Attorney and the staff at his office for their continuous and successful efforts to combat antiquities smuggling, as they were able, through their efforts, to recover these valuable artifacts.

He also noted that "this initiative is another example of strengthening the long-term cooperation and friendship between the U.S. and Iraq."

The artifacts include an ivory plate dating back to (701-800 BC), which depicts a winged sphinx with a human head, which was used to decorate furniture during the royal period of King Sargon I (721-725 BC) in Nimrud. The ivory plate is worth about $450,000 and was looted during the 1990s in the aftermath of Operation Desert Storm. The piece first appeared on the international art market on November 2, 1994, and it was bought by Steinhardt on September 10, 2010.

The second piece is a bowl with a scalloped flower, valued at $200,000, looted from Nimrud, a city located in northern Iraq dating back to the Neo-Assyrian period (911-612 BC). It's worth $200,000. It was trafficked by the Islamic State terrorists, as the golden bowl appeared in the international art market for the first time on October 22, 2019, and Steinhardt bought it on July 10, 2020.

As for the other three artifacts, they were a group of Mandaean manuscripts, valued at $850,000, and two cylindrical boxes with separate lids, valued at $150,000 each.

On Friday, the Iraqi Ministry of Foreign Affairs announced that Iraq has recovered two artifacts from the Sumerian and Babylonian eras, one of which is 4000 years old.

The Foreign Ministry said in a statement, "The Consulate General of the Republic of Iraq in Los Angeles received two artifacts from the Sumerian and Babylonian eras, one of which is 4000 years old," noting that "one of the pieces is a part of a cuneiform tablet, dating back thousands of years. possibly it was transferred out of Iraq during the looting of the country in the twentieth century."

The US handed over 17,000 looted artifacts to Iraq last year, including the famous 3500 year-ole Gilgamesh's dream tablet.

Iraq’s antiquities have been looted throughout decades of war and instability since the 2003 U.S.-led invasion that toppled Saddam Hussein. Iraq’s government has been slowly recovering the plundered antiquities since. However, archaeological sites across the country continue to be neglected owing to a lack of funds.

At least five shipments of antiquities and documents have been returned to Iraq’s museum since 2016, according to the Foreign Ministry.