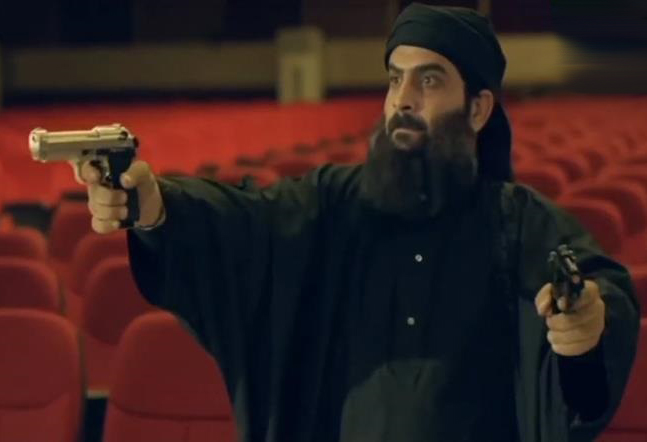 By David Zucchino
So Satan marries a Jewish woman in Iraq. She lays an egg, which hatches and pops out a wild-eyed, bearded madman the proud couple names the "ISIS-ling."

Their son becomes known as "Beheader." He lops off heads with a bloody sword, shoots people dead and blows up everything in his path with homemade bombs. For exercise, he lifts barbells made of human skulls.

This is Iraq under a future Islamic state, as imagined in "State of Superstition," a hit comedy on state-run Al Iraqiya TV. The half-hour show turns a deadly serious subject — the reign of terror imposed by the extremist group Islamic State in parts of Iraq and Syria — into fodder for spoof and satire.
The Beheader character is a comic takedown of Abu Bakr Baghdadi, the self-proclaimed caliph and Islamic State leader. An actor in a preposterously long and tangled fake beard — one of a couple of dozen fake beards glued on to characters each episode by an overworked makeup artist — plays him as a slogan-spewing buffoon.

The show takes enormous risks in the name of satire in a country where Islamic State has tortured and killed Iraqis and set off car bombs that have killed hundreds of people.

"Making a comedy about Islamic State is like trying to defuse a bomb," said Thair Chiad, the show's urbane writer and creator. "One mistake and you die."

"Somehow," Chiad said, letting out a rueful laugh in his office next to the soundstage where the show is filmed, "we've managed to avoid blowing ourselves up, thanks to God."

Chiad said he and several cast members had been threatened with death by Islamic State. Some actors have refused to have their names listed in the credits for fear of retaliation from the militant group's "sleeper cells," which set off car bombs almost every day in Baghdad.
Wissam Abd Wahad, an actor who plays Islamic State's hapless minister of security, said he shut down his Facebook page and changed his email address after receiving death threats.

Because he insisted that his name be listed in the credits, Wahad said, his family rarely lets him leave home after returning from work. He takes a different route to and from the station every day. Neither the show nor the police provide any special protection.

Wahad, 31, said he was eager to join the show after reading the script because he wanted to do his part to expose Islamic State as a destructive force that has perverted Islam.

"As actors, we can be soldiers in the country's fight against Daesh," Wahad said, using the Arabic acronym for Islamic State. "It's a small thing I can do for my country."

Wahad played a handsome Lothario on TV before joining "State of Superstition." "I went from heaven to hell," he joked.
His character on the show is a drunk passed out in a gutter when Islamic State takes over Iraq. He is appointed, naturally, as minister of security, in charge of executing people and blowing things up.

Wahad wears a fake black beard that hangs halfway down his chest . It's designed to appear so ridiculous that viewers lose their fear of the bearded militants and view them instead as pompous fools.

Chiad said he writes the episodes as a way of defusing what he called Iraqis' "phobia" of Islamic State radicals by exposing them as hypocrites. Hence the sex and alcohol. Many Iraqis contend that the militants, who have boasted about selling captured women and girls as sex slaves, also secretly guzzle alcohol.

"We had two options — tragedy or comedy," Chiad said. "We went with comedy. You get a more positive reaction from comedy."
The show's title is a play on the word khilafa, or "caliphate." By changing one letter, it becomes khirafa, loosely translated as "superstition" or illogical belief.

"Bomb to your heart's content," the cast sings, "and you will lunch with the prophet Muhammad."

The show not only lampoons Islamic State, but also tackles radical Islam and gratuitous violence.

And, yes, there's the promiscuous Jewish woman wearing an oversized Star of David necklace who couples with the Satan character dressed in a red suit, complete with pitchfork. The Jewish character could be interpreted as satirizing widespread anti-Semitism in the Arab world. But her portrayal may also reflect widely held prejudices in a country where people spread conspiracy theories that Israel, with U.S. help, secretly created and funded Islamic State in a plot to destroy Iraq.
At a cast party on the show's set last week, actors and producers celebrated wrapping the final episode. The show's 30 installments have aired every night at 9 since late September. It is appointment TV, beamed around the country — including western and northern regions seized by Islamic State this year.

The episodes are also available on seven satellite TV networks and are translated into English on YouTube, drawing a worldwide audience. The goal, Chiad said, is to educate the world about the nature of Islamic State. A special target is young Muslim men tempted by slick Islamic State recruitment videos.

Thousands of viewers have called or emailed to praise the show, Chiad said. State security officials have told him that Islamic State has taken notice.

"They tell me Daesh is very upset. They hate this," Chiad said.

The show is hardly subtle. For instance, Islamic State forms a soccer team of bearded, incompetent non-athletes. They challenge an all-star team of the world's best soccer players to a World Cup "death match."

When the all-stars score the first goal, the Islamic State team kidnaps the referee's son until he reverses the score. Ultimately, the Islamic State players execute rival players and declare victory, raising a trophy with the top sheared off — a spoof on beheadings, in case you missed it.

At Islamic State checkpoints, the militants don't bother to search for bombs. They own them all. Instead, they search people's minds, using a high-tech brain scanner they clearly have no idea how to operate.

The show also takes barbed shots not only at Jews and Israel, but also at Saudi Arabia and Qatar, widely accused by Iraqis of funding and supporting Islamic State.

The show's militants air a Saudi-backed TV channel whose logo drips with blood. The emir of Qatar is portrayed as a booze-swilling American cowboy wearing a huge cowboy hat and brandishing a six-shooter.

Taha Wam, a well-known Iraqi actor who plays an evil imam advising the militants, said it's important to reveal the true powers behind Islamic State, at least as viewed by state-run TV.

"We want people to know all about the outside agents who created Daesh," said Wam, a distinguished, mustachioed man in his 60s, dressed in a tailored suit as he attended the cast party.

"We know the message is getting through," he said, smiling, "because I get a lot of death threats."

Producers rushed to finish airing the show before the Islamic New Year, running two episodes each back-to-back on the last three nights. On the 10th day of the year, Shiites commemorate the death of Imam Hussein, the revered grandson of the prophet Muhammad.
"We don't want people laughing during a period of mourning," Chiad said.

He has no plans for a "State of Superstition II."

"We've made our point," he said.
Los Angeles Times
PUKmedia