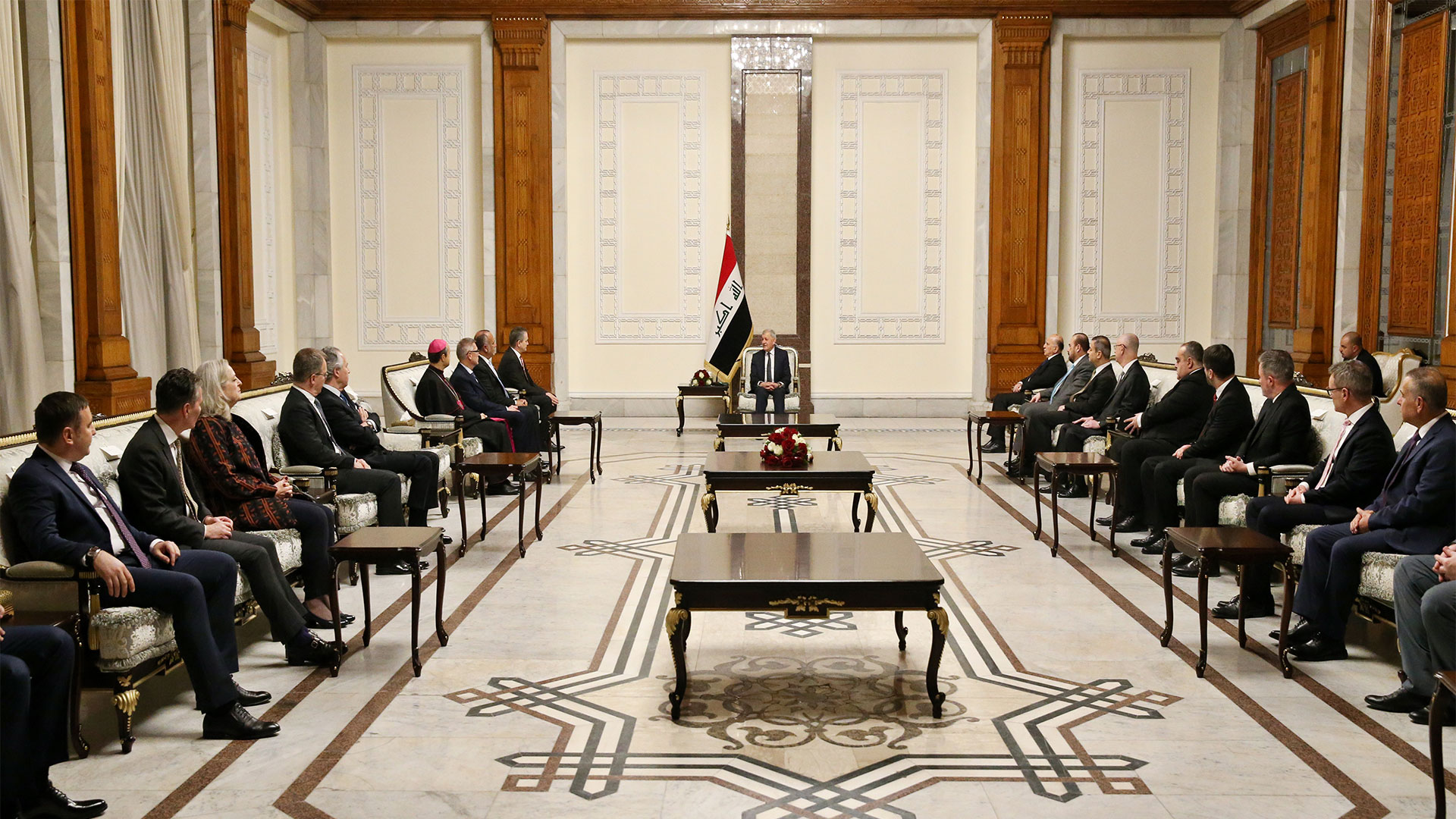 President Rashid's meeting with the ambassadors

Foreign diplomats praised the recent changes Iraq has seen and reaffirmed their support for the country's efforts to achieve stability and progress.

On January 22, 2023, Abdullatif Jamal Rashid, the President of Iraq, held two separate meetings at the Baghdad Palace with the ambassadors of the European Union (EU), the United States (US), and Canada to Iraq, as well as Rosemary A. DiCarlo, the Under-Secretary-General of the United Nations (UN) for Political and Peacebuilding Affairs, and Jeanine Hennis-Plasschaert, the UN Special Representative of the Secretary-General for Iraq and Head of the United Nations Assistance Mission for Iraq, and emphasized his nation's intention to deepen connections with the participants. Iraq is eager to deepen its cooperation with EU countries and promote communication in many crucial sectors, he added. He also stressed the importance of strengthening relations with the UN in a way that makes it easier to achieve predefined goals.

President Rashid shared the outcome of his visits to the Climate Change Conference (COP 27) in Sharm el-Sheikh, Egypt, and the 2022 Arab League summit in Algeria, where he received everyone's support and willingness for Iraq to play a significant role that will help strengthen regional stability.

He also spoke about his participation in the World Economic Forum in Davos and the discussions he had about the situation in Iraq, the economic difficulties the country is experiencing, as well as the impacts of climate change on the environment and methods to mitigate its effects. According to the president of Iraq, the majority of the country's problems may be overcome by working together.

In addition, the president of Iraq stressed to the UN delegation the importance of putting into practice practical solutions to reduce environmental pollution factors in the country. He underlined the need to complete important water-related projects and reach agreements with upstream nations in order to assure a reasonable supply of water.

Furthermore, President Rashid also emphasized the need for ongoing improvement in the relationship between the Iraqi government and the Kurdistan Regional Government (KRG), as well as the desire of all parties to settle outstanding disputes in accordance with the law and the constitution while protecting the rights of all Iraqis.

Moreover, he informed the ambassadors that the Iraqi government has an ambitious ministerial program to improve the state of services, rebuild and reconstruct the infrastructure, and reactivate and reconstruct factories and laboratories to attract investors due to the availability of promising opportunities for companies to invest in Iraq through the development of essential projects and infrastructure.

By the same token, the Iraqi President emphasized to the UN delegation that the lengthy period of time needed for elections and the formation of the government resulted in an administration that was representative of all Iraqis. In this regard, he spoke about the safety and economic stability of Iraqi cities, emphasizing the steps taken by the government to clear the cities of military presence.

The President spoke about the political parties' tenacious efforts to pass the budget, accelerate the government's plans to enhance the housing and health sectors, and complete crucial projects to develop the infrastructure of Iraqi cities.

Additionally, he discussed the topic of the displaced, bringing up their poor living situations and highlighting the need for coordinated efforts to get them back home after creating the proper conditions and resolving this matter.

Also, in response to the German Bundestag's resolution recognizing the genocide carried out against our Yazidi people by the terrorist organization Islamic State (ISIS), President Rashid expressed his gratitude and appreciation to the German government.

The ambassadors responded by expressing their countries' continued support for Iraq and congratulating it for organizing and winning the 25th Gulf Cup.

Mrs. Rosemary DeCarlo reaffirmed the United Nations' support for Iraq in multiple areas, in a way that enhances security and stability in the nation and advances Iraqi goals, as well as joint efforts to address the issue of displaced people and other humanitarian issues. She confirmed the hiring of a consultant on climate change and security in Iraq by the UN Secretary-General and also referred to the UN's particular interest in Iraq in order to help it cope with the difficulties of climate change and its commitment to help lessen the risks of drought and water scarcity. 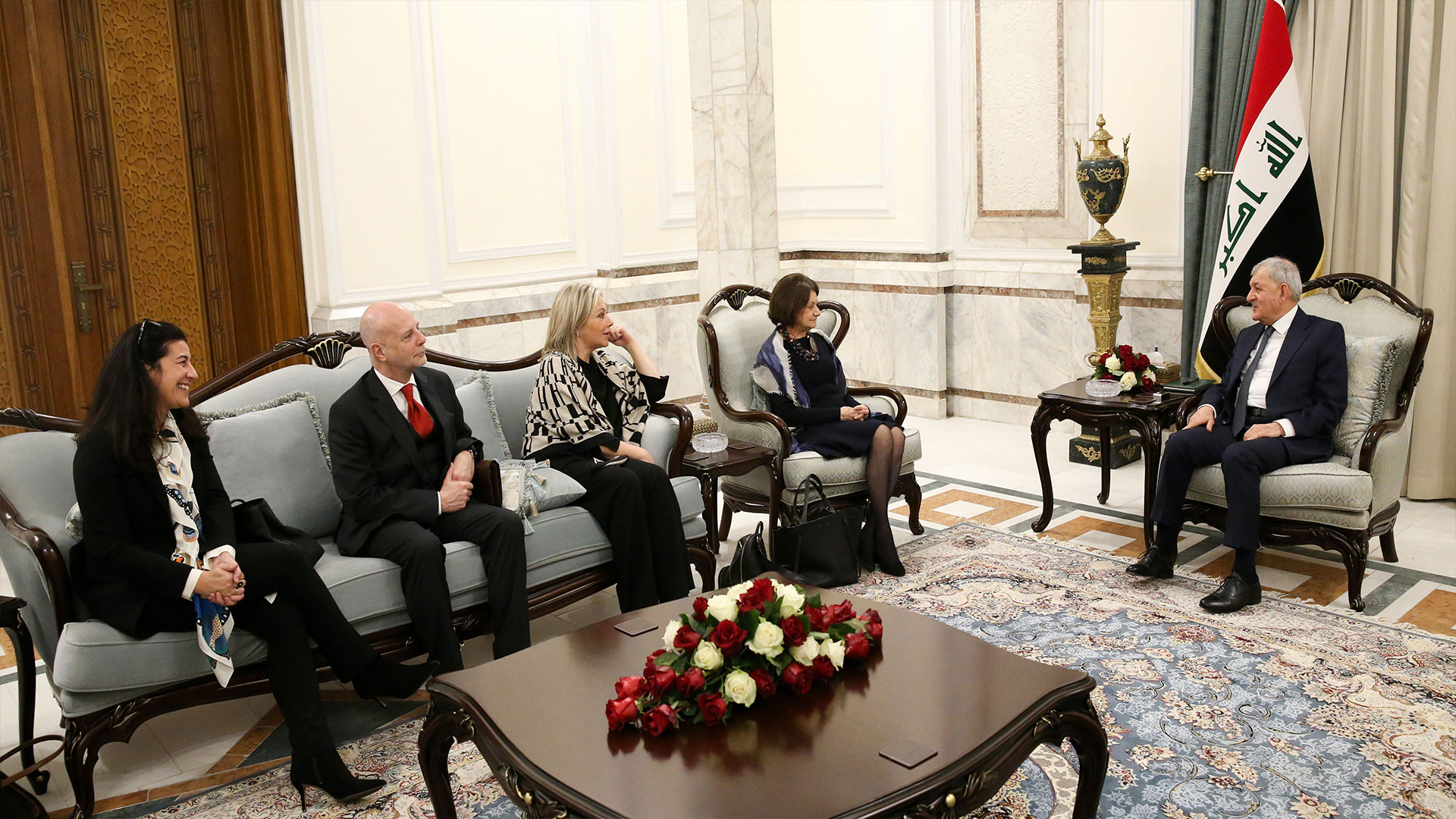