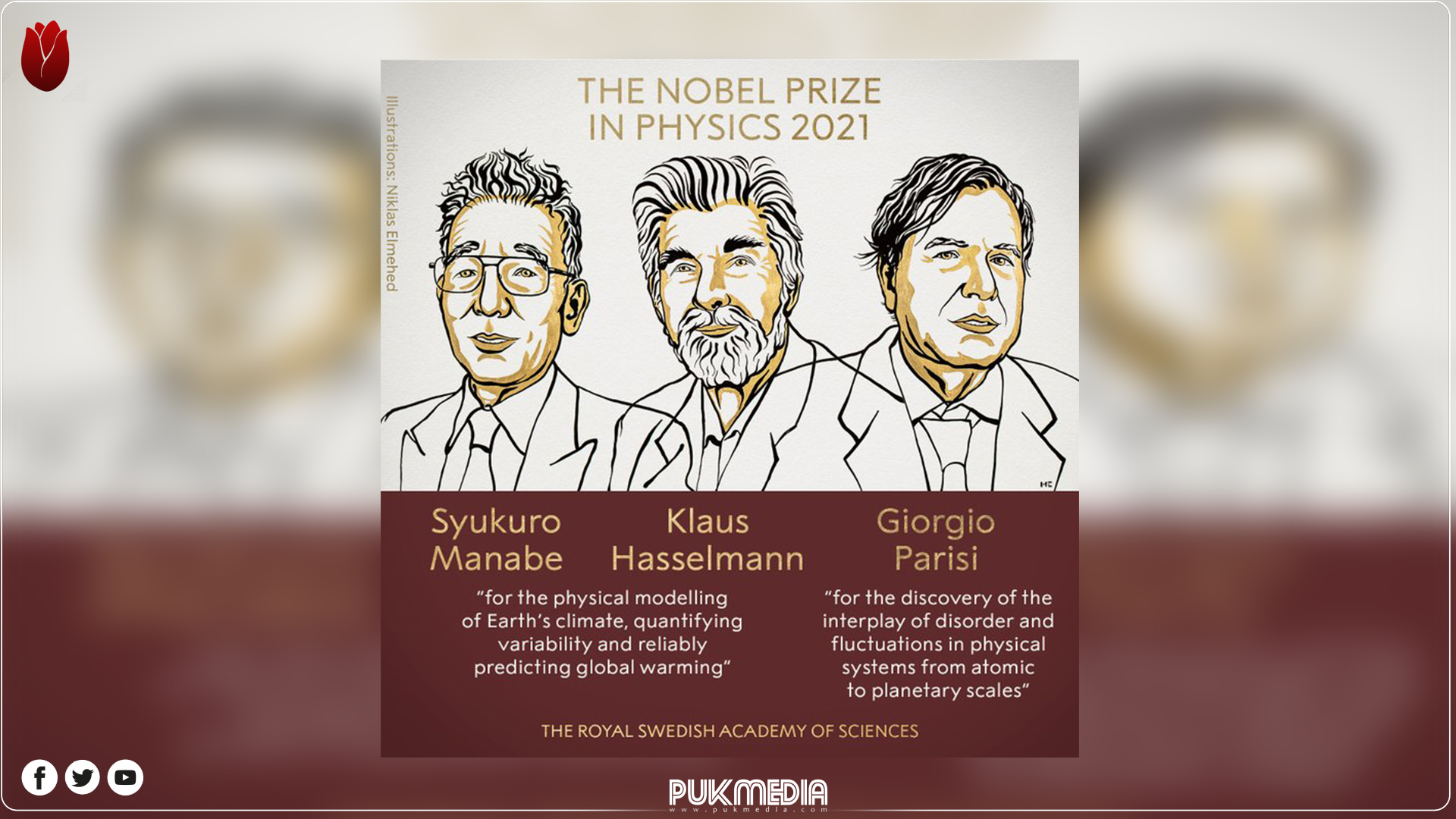 Three scientists won the Nobel Prize for physics on Tuesday for work that found order in seeming disorder, helping to explain and predict complex forces of nature, including expanding our understanding of climate change.

Syukuro Manabe, 90, originally from Japane and Klaus Hasselmann, 89, from Germany were cited for their work in “the physical modeling of Earth’s climate, quantifying variability and reliably predicting global warming”.

The second half of the prize was awarded to Giorgio Parisi, 73, for “the discovery of the interplay of disorder and fluctuations in physical systems from atomic to planetary scales”.

All three work on what are known as “complex systems,” of which climate is just one example.

The panel said Manabe and Hasselmann “laid the foundation of our knowledge of the Earth’s climate and how humanity influences it”.

Starting in the 1960s, Manabe demonstrated how increases in the amount of carbon dioxide in the atmosphere would increase global temperatures, laying the foundations for current climate models.

About a decade later, Hasselmann created a model that linked weather and climate, helping explain why climate models can be reliable despite the seemingly chaotic nature of the weather.

He also developed ways to look for specific signs of human influence on the climate.

Parisi, 73, “built a deep physical and mathematical model” that made it possible to understand complex systems in fields as different as mathematics, biology, neuroscience and machine learning.

His work originally focused on so-called spin glass, a type of metal alloy in which the atoms are arranged in a way that changes the material’s magnetic properties in apparently random ways that baffled scientists. Parisi was able to discover hidden patterns that explained this behaviour, theories that could be applied to other fields of research, too.

After the announcement, Parisi said that “it’s very urgent that we take very strong decisions and move at a very strong pace” in tackling climate change.

“It’s clear for future generations that we have to act now,” he said.

Hasselmann, for his part, expressed bewilderment.

“I do not really understand it, but it feels fantastic,” he told the Swedish news agency TT. “I heard it just five minutes ago. I’m still trying to understand it.

“I do not think I have done too much research in my life, but I have had a lot of fun doing it with my colleagues,” he continued. “It is enough for me that my research shows that humans have actually affected the climate.”

The winners were announced Tuesday by Goran Hansson, secretary-general of the Royal Swedish Academy of Sciences.

Manabe is now at Princeton University in the US, Hasselmann at the Max Planck Institute for Meteorology in Hamburg, Germany, and Parisi at Sapienza University of Rome.

In their work, the physicists used complex mathematics to explain and predict what seemed like chaotic forces of nature in computer simulations, called modelling. That modelling has given scientists such a solid understanding of those forces that they can accurately predict weather a week out and warn about the climate decades in advance.

Some non-scientists have attacked and ridiculed modelling, but it has been key to the way the world tackles one of its biggest problems: climate change.

“Physics-based climate models made it possible to predict the amount and pace of global warming, including some of the consequences like risings seas, increased extreme rainfall events and stronger hurricanes, decades before they could be observed. Klaus Hasselmann and Suki Manabe were pioneers in this area and personal role models for me,” said German climate scientist and modeller Stefan Rahmstorf.

“We now witnessing how their early predictions are coming true one after the other.”

When climate scientists and former U.S. Vice President Al Gore won the 2007 Nobel Peace Prize, some non-scientists who deny global warming dismissed it as a political prize. Perhaps anticipating controversy, officials who spoke at the announcement emphasised that Tuesday’s was a science prize.

“It’s a physics prize. What we are saying is that the modeling of climate is solidly based on physical theory and well known physics,” Swedish physicist Thors Hans Hansson said at the announcement.

It is common for several scientists who work in related fields to share the prize.

The prestigious award comes with a gold medal and 10 million Swedish kronor (more than $1.5 million). The prize money comes from a bequest left by the prize’s creator, Swedish inventor Alfred Nobel, who died in 1895.

On Monday, the Nobel Committee awarded the prize in physiology or medicine to Americans David Julius and Ardem Patapoutian for their discoveries into how the human body perceives temperature and touch.

Over the coming days prizes will also be awarded for outstanding work in the fields of chemistry, literature, peace and economics.